MauritiusHorse.Racing > GRA > Mauritius Races are Off, until the court decides its Future 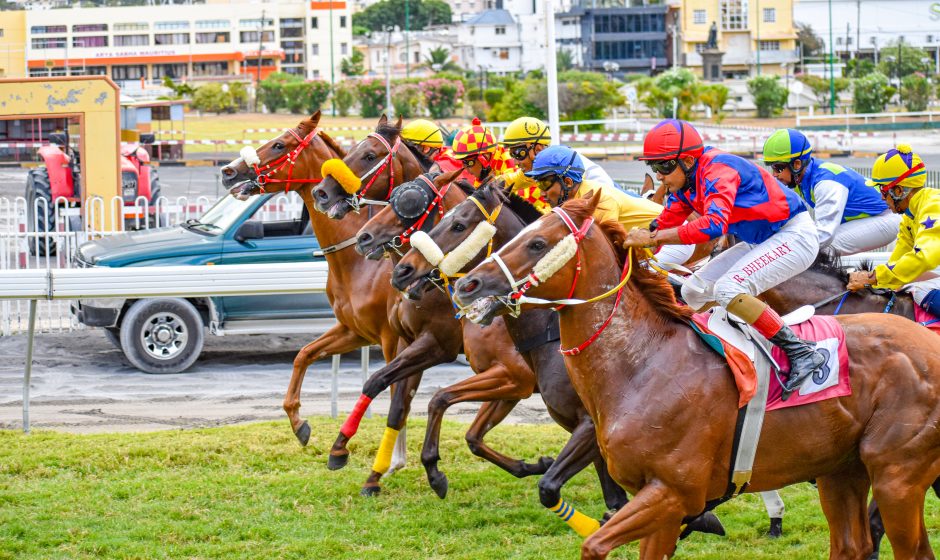 Friday 22nd of April 2022, will mark the end of Horse Racing in Mauritius.

MauritiusHorse.Racing was present at an urgent requested Press Conference hosted by the president of the MTC/MTCSL Mr Jean Michel Giraud with the MTCSL directors the Board of Directors of MTC Sports and Leisure Limited is made up of Mrs. Shalini Roy Bunwaree-Nagdan, Messrs. Vishwadass Kaniah, Jérôme Pilot, Paul France Tennant, and Anil Kumar Ramnarain.

Mr Jean Michel Giraud the General Manager of MTC and Acting CEO of MTCSL Mr Jérôme Pilot spoke to the press and explained why they are held hostage by the HRD- The Horse Racing Division, a division of the GRA – Gambling Regulation Authority with their ongoing battle to get their license with acceptable win-win conditions to run and organize this 2022 racing season.

“For the first time in history, we have had to hold a press conference a day before the races are scheduled to start, to say that right at this moment we are not even sure that we will start the racing season tomorrow.”

He went on to say, that it is unacceptable that the HRD is refusing to meet with his acting CEO, Mr Pilot who also like Mr Giraud, is waiting for their PML, Personal Management License from the GRA, who is playing a very dangerous game with the MTC/MTCSL which Mr Giraud said that they will not back down from all these unprofessional political nominees who have only shown a total disregard, and with sickening, harassing and malicious emails, and he is asking for a more professional conduct, with respect and good manners towards all the MTCSL executives, employees and management of the MTC/MTCSL.

He further added that:

“Both parties are yet to sit around a table and find a mutual win-win agreement as partners. If that mutual agreement fails to happen, then an entire horse racing industry will be penalized.” Mr Giraud mentioned again: “He would like everyone to get around the table as partners, and all these malicious emails being sent must stop.”

He reminded everyone, that the “Illegal Betting” was their biggest challenge, that the government betting tax increase (14%) is pushing bettors to bet illegally, which is a fact.

Let’s remind everyone here that only 4 years ago, in 2018, according to EY the horse racing industry was responsible for generating Rs6. 2 billion in GDP, creating 2,170 jobs, equivalent to Rs2 billion worth of labor income, and contributing to Rs679M of Government revenue.

The Mauritius Turf Club (MTC) is the sole horse racing organizer in Mauritius. Races are held at the Champ de Mars racecourse, which is the oldest racecourse in the southern hemisphere, and one of the oldest worldwide. In addition to being a popular source of entertainment to Mauritians, the equestrian sport and related events are largely appreciated by tourists visiting the island. Horse racing and related activities are among the top 15 most popular things to do in Mauritius as of June 2019 ,and the most visited sports event on the island.

Here is the report https://media.mauritiusturfclub.com/images/stories/pdf/mtc_eia.pdf

According to the MTC/MTCSL 2020 annual report that we are talking about a once Rs5.9B industry (2019), which with covid and lockdown, dropped to Rs3.2B in 2020 which the MTC/MTCSL employs nearly 400 staff, and contributes towards this industry.

Back to the Press Conference.

Mr Giraud then said that there was no communication between both parties in regards to their license that last Friday, to his surprise and that of his colleagues, had read in the press that the HRD held a press conference at Hennessy Hotel, and claimed to the press and the Mauritian people that races will start on Saturday 23rd April without the main racing organizer even having a license to do so, and himself and Mr Pilot not having their PML.

He went on to say that as partners he wanted all parties to have a professional meeting in a cordial manner. The Board of MTC/MTCSL wants the races to start asap, but not in these conditions. He even said that they are willing to allow the HRD to use all their infrastructure and equipment until the court decides which payment is acceptable, and that they are prepared to have a 3rd party estimate such operating costs.

They offered a retainer fee of Rs1M per race meeting for the HRD to use the MTCSL facilities, including the equipment and studios etc, saying that they have Rs100M worth of equipment, including cameras and studios, and that if something breaks who will bear the cost? A fair estimate and claim for their services if you ask us, especially after they are receiving 14% betting tax from this industry –  around Rs700M a year.

Mr Giraud, said the MTCSL received the trainers who are furious with the situation, and many trainers and owners will not run their horses without stake money. The stake money which the MTC/MTCSL were responsible for when they had a business to run and were able to race and make money which today is not possible with all these restrictions, a closed Champs De Mars with only 150 persons allowed, including staff, with limited members, and horse owners, no bookmakers, no food stalls and no public. A situation which the public views as a hidden agenda to kill the MTC/MTCSL and purchase their assets should they end up in receivership, as they are now a public company.

Mr Giraud said that they have done everything they can do for the 2022 racing season to start and that with these conditions and new challenges they cannot accept everything that these political nominees want, and claim to be theirs without compensation. The MTCSL then proceeded to lodge a Constitutional request court to demand damages against its IP theft against a Rs7.4 Billion ($162,500,000) which we will let the court decide. One of the three court cases against the GRA/HRD is scheduled on the 12th of May. Race goers will certainly follow closely this court case to hear the verdict, which will decide the future of racing in Mauritius. This legal battle that may never end, and may be the death of 210 years of racing in Mauritius.

Mr Pilot then proceeded and confirmed that on the 15th April 2022, the board of MTCSL did receive a letter from the GRA confirming their approval for their 2022 racing organizer license, that  they had to sign this agreement without knowing all the required conditions attached to this license, which the board of directors of the MTCSL all refused, and knew that this was a trap.  Mr Pilot, said that: “Each time they refused to cash in the cheque, they had a different story.”

Mr Pilot shared that one of their ridiculous reasons was they would not accept such a large amount, as they knew what financial troubles the MTCSL is in at this present moment.

Summary of last week, which the MTCSL employees and directors had to endure:

The MTCSL then proceeded via the legal way and issued a: Mise en Demeure” to the GRA/HRD  for this refusal to take a bank cheque and start the racing season.

It is clear who is playing the villain here, and is merely pretending to regulate the sole racing organizer, or will they give the same conditions to the second horse racing organizer which we all learnt last year is looking seriously at this role and challenge, which all the racing world all knows its real agenda is to tarnish and kill the MTC/MTCSL or let’s call it day light robbery. How such a so-called independent government authority can act in such breach of the IPs and property laws, all disguised under an unconstitutional amended law made to dictate and not regulate, and worst, profit from an industry which they want for themselves and clearly stripping naked the 210 years founders and Mauritius horse racing organizer, the MTC / MTCSL. Worst, the GRA have claimed they are looking for a new operator who want to organise online betting for horses and casino. They actually have been actively looking for gambling business partners to operate not as a regulator but a gambling business themselves as if the 14% betting tax, Rs700M revenue which the government gets from horse racing is not enough, and they cannot afford Rs1M a meeting to support the owners of a private club which they will forever need their IPs, expertise and know-how. You cannot learn 210 years of racing organization in a few months.

At 3:15 pm, the MTCSL board were advised and told the press that they just had received the latest HRD conditions, a long list of 25 conditions just delivered to the MTCSL, less than 24 hours before the first race meeting of 2022.

Mr Giraud and Mr Pilot asked if the board could meet in private to deliberate and if the press would wait until the board decides what action will be taken. We all agreed and took a break.

After less than 10 minutes, while busy putting this article together, the board came out and said that the MTCSL has received the latest GRA/HDR conditions which Mr Pilot read two conditions out loud – sections (4 & 10) which he qualified unacceptable, and that the board of MTCSL will not accept such poor racing conditions, and he said races will not start tomorrow and not for a long time, until the court decides.

He mentioned that Section 4 which is currently in a legal battle in court for their IP, rules and racing, their racecards and Section 10 is regarding their equipment and property usage.

The HRD requests to provide all the infrastructures and their equipment for free is robbing someone of his own property, and right to property. Working without compensation is unconstitutional.

All this charade will keep all the racing stakeholders, the stables, the owners, the jockeys, the horse keepers, the racegoers, the bookmakers, the gamblers and all those involved in this industry on the very edge of an entire industry collapsing before our very own eyes.

We will let all the GRA/HRD press releases and their first meeting nominations/racecards without stake money plus the famous video of the first meeting races line draws which happened at the HRD’s office where we see officials drawing from a paper bag. How professional, we will let this video do the talking of what we have to deal with in 2022.

Is the GRA/HRD really a professional and independent horse racing organization, or just another political institution put in place to milk the system? Are they regulating or are they the organizer themselves now with all these powers?

Or are they just another failed government institution which will kill horse racing and whose sole purpose is to dictate, rule and openly steal the MTC/MTCSL’s intellectual properties (IP) and who can amend unconstitutional laws to dictate their wishes to use all the facilities, including their infrastructure and equipment – Free of charge?

Welcome to Mauritius, the Dodo Land, where the rules of racing of the founding member and sole horse racing organizer is stolen by a GVT division and a regulator where a dictatorship now reigns under the symbol of the sun.

This Government has again created a mess and we refer you to Me Yazia Nazroo’s article in L’Express in English which further explains this messy and sickening situation that we are in today.

Like Mr Giraud said, we will let the Mauritian people be the judge of this sporting scandal.

The father killed Mauritian football, and now the son has killed the Mauritian races.

The only sport and weekend distraction that unites a nation. 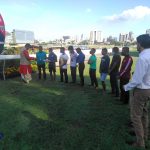