In Port-Louis, the use of the Champ-de-Mars racecourse has been withdrawn from the Mauritius Turf Club (MTC), a 210-year-old club. Reason: they did not obtain a permit for the organization of the races by the regulatory body piloted by a close friend of the Prime Minister. The town hall of Port-Louis seems to have planted the last nail in the coffin of the Mauritius Turf Club (MTC), the historic organizer of horse racing in Mauritius. On Wednesday, the city secretary informed the venerable institution founded in 1812 – which makes it the oldest club in the southern hemisphere and the second oldest in the world – that it is withdrawing its full enjoyment with immediate effect. of the Hippodrome du Champ-de-Mars which was leased to him during all these years. The town hall justifies this decision by the fact that the Gambling Regulatory Authority (GRA) has not granted any license to the MTC for the organization of the races. The town hall also puts forward the shortfall for the State in terms of taxes and people who earn their living thanks to the races, which have not been held since last Saturday. The season should have started on April 23, but the MTC refused to comply with certain conditions imposed by the GRA.

This regulatory body created by the government to bring the MTC to heel is led by Dev Beekharry. Former deputy editor-in-chief of a magazine where the editorial choice is dictated more by the advertising department, he was Pravind Jugnauth’s press attaché between 2000 and 2005 and between 2010 and 2011. He remained faithful to him during his two crossings of the desert before being adviser to Prime Minister Anerood Jugnauth in 2014. That is the time that the old man gives up his chair to his son. With the passage of the law against money laundering and the financing of terrorism in 2020, coupled with the election of Jean-Michel Giraud as president of the MTC last year, the GRA invited the club to operate as a private company. The latter “resurrected” its subsidiary MTC Sports and Leisure Limited (MTCSL) launched a few years earlier (See Le Quotidien of March 24, 2021). Cohabitation with the GRA has not been easy. The MTC has turned to the Supreme Court for some decisions it deems inappropriate.

For example, the GRA did not accept on Tuesday April 19 the payment of one million rupees for obtaining the license of the MTCSL for the organization of the races. It was invited to settle this transaction in four instalments. MTCL served a formal notice, claiming damages of 7.3 billion rupees. The GRA has returned to the charge, demanding that the racing program be drawn up by its Horse Racing Division, which Jean-Michel Giraud finds “unacceptable”. The case of Champ-de-Mars will also have to be debated before the judges, the town hall having indicated in its letter that it acted on the instructions of the Ministry of Local Authorities. For the MTC, it is clear that the tactic of the government is to bleed it white by depriving it of income. This, in order to leave the organization of the races to a betting magnate, Jean-Michel Lee Shim, who is known to be the biggest financial backer of the Jugnauth clan. Khulwant Ubheeram, a frontman of Jean-Michel Lee Shim, has already submitted a proposal to the GRA for the organization of the races through People’s Turf Plc Ltd. The irony is that People means Lepep in Kreol, which seems to be a nod to the Alliance Lepep which won the December 2014 elections. The Champ-de-Mars removed from the MTC, Jean-Michel Lee Shim will figure of savior of the most popular sport after football.

Slow death The founder of SMS Pariaz indeed owns a racecourse in Petit-Gamin, a locality wedged between Arsenal and Balaclava, in the northwest of the island. He already controls horse racing lotteries and a horse feed company, which coincidentally led to a change in the law. Decisions have also been taken by the Prime Minister through budget exercises in recent years to promote his activities. Five years ago, two racecourse projects were given a first-class funeral in order to leave the field open to Jean-Michel Lee Shim. Automatic Systems Limited (ASL), the operator of horse betting and foreign football matches via telephone was the favorite for a project in Pierrefonds in partnership with the sugar refinery of Medina (see Le Quotidien of March 22, 2016). It forfeited due to changes to gambling legislation which favor rival SMS Pariaz. The Pierrefonds site was considered better than the Champ-de-Mars which is crushed by the heat in the basin that is Port-Louis. The sugar group Terra had also approached ASL for a similar project in Pamplemousses, in the North. More temperate, Pierrefonds was preferred, especially since half of Mauritians live in the Plaines-Wilhems from where it is easily accessible. These two projects were going to be submitted quickly during a special assembly of the MTC… The GRA vs MTC match does not bode well for race goers. Horse racing, they assure, will have the same fate as football. Or a slow death. 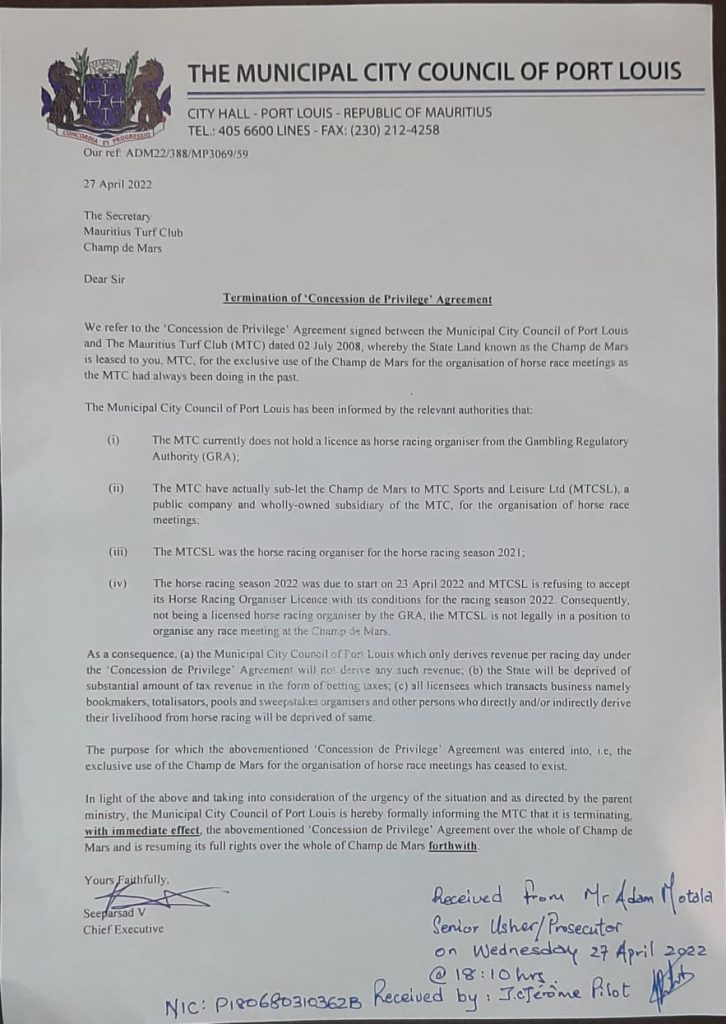 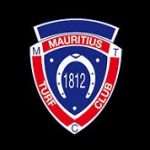 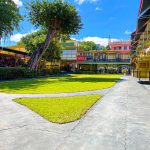